skip to main | skip to sidebar

The president on alcohol addiction

The second social evil President Patil discussed in our conversation was alcohol addiction. She recalled her early-1970s experience, as Cabinet Minister for Social Welfare in the Maharashtra government, when the State went though a severe three-year drought.

In a pioneering intervention, the State government had introduced the Maharashtra Employment Guarantee Scheme (EGS), a sustained public works intervention that has been commended by the United Nations Development Programme and by scholars like Jean Dreze for its remarkable scale, sweep, and sustained reach. The EGS, which was launched in 1972, given a statutory basis in 1977, and became operative as a law in 1979, guaranteed employment to all persons above the age of 18 who were willing to do unskilled manual work on a piece-rate basis. It sought to supplement the inadequate income of landless and land-poor families from agricultural work by minimum guaranteed work, at a defined wage, in government-financed public works programmes. Launched as a response to a crisis, it has continued as a major state intervention to mitigate the harsh edges of rural poverty, sustain household welfare, and contribute in some measure to the development of the rural economy.

President Patil recalled that EGS had already begun, in the early 1970s, to make a difference to the incomes of agricultural labouring families. But what about household welfare? During her visits to work-sites as Minister for Social Welfare, she was pleased of course to see the crèches for little children. But she also asked officials about the uses to which the additional incomes were put — and one enterprising Collector did a sample survey in a rural district.

The findings were an eye-opener. About 50 per cent of the landless and land-poor households saw some savings, including bank deposits, the repayment of loans to banks, the purchase of a little jewellery, or money set aside for a daughter’s marriage. The remaining 50 per cent “squandered the money in drinks and gambling,” the President recalled. “For the removal of poverty,” she concluded, “only giving money is not adequate. The child and wife suffer. If 50 per cent are in this atmosphere, how will we remove poverty?”

So the eradication of alcohol, and other forms of, addiction was a socio-economic challenge. President Patil emphasised the need for regular and imaginative schemes to bring alcoholics out of their addiction, which would only ruin them and their families. 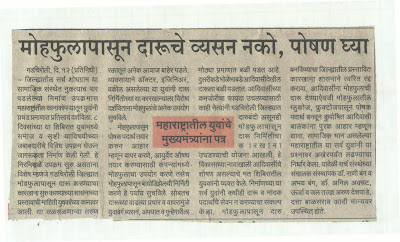 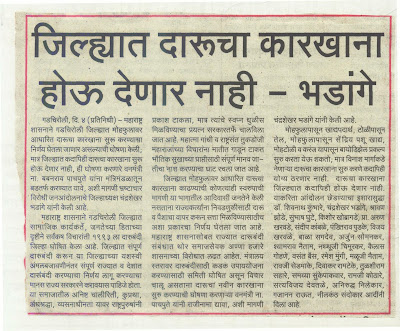 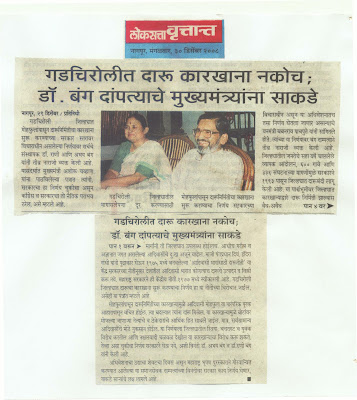 Posted by Dhananjay at 12:31 AM No comments:

Moha flowers - not for liquor, but for nutrition : An appeal

Maharashtra state is known for taking progressive steps in various fields. In such state, efforts for some wrong and misleading steps for liquor policy are being observed through declarations by some ministers. We are writing this letter to alert you regarding this and expect you to such wrong decisions at appropriate time.

A liquor factory from moha flowers is planned in Gadchiroli district which is liquor-free as a result of people's movement and government's approval to that movement. The ministers of Maharashtra have been saying this again and again and this plan is coming as proposal in front of the Maharashtra cabinet to decide on it.

We feel this plan is a severe mistake due to the following reasons:

1. The Gadchiroli district is declared anti-liqour as a result of the anti liquor movement of the district residents along with demand of 600 villages and 336 organizations, All licenses of consuming and selling liqours are banned in Gadchiroli. Consuming and selling alcohol is an crime here. Considering this, to open an liquor factory in this district is a funny paradox and it will be moral defeat of the government and the Congress party.

2. If the factory is opened here, the production will demand market and will be available by legal/illegal means in the district. It will cause increase in the pains and exploitation of already poor and ignorant tribal residents.

3. Because of this reason, the 'Liquor policy for the tribal people' of the Central government made by the efforts of late Smt. Indira Gandhi, directs that no liquor should be produced and/or sold in the tribal areas. Maharashtra government has adopted this policy in 1977 when Late Shri. Shankarrao Chavan was the chief minister. The decision to start current liquor factory will be a contradiction to the decision enforced by this policy.

4. Due to this factory, the moha flower, a traditional nutrition for the tribals will be snatched from them and they will be served with liquor instead. Liquor instead of nutrition is an terrible plan.

5. The only beneficiaries of the factory will be a few leaders and contractors. The tribal community in general will bear a great loss.

6. This plan or decision will be opposed largely by ladies, microcredit-groups and youth.

7. Even the naxalites might oppose this proposed factory. The government will provide a cause for them.

We are worried and restless because of this and request the government the following :

3. To get rid of many bad customs, the government is already running many schemes. The government should take initiative for "Addiction-free village/town" scheme with the help of people.
Yours,
Posted by Dhananjay at 6:09 AM 3 comments: